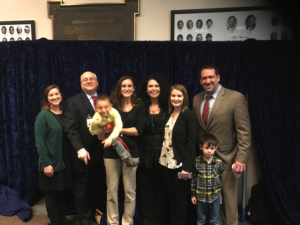 Dr. Sue Sisley, Representative Jeremy Faison and Members of the Board of Directors at Legislative Plaza in Nashville

Safe Access Tennessee is incorporated in Tennessee as a nonprofit, social welfare advocacy group. The Corporation is registered with the Tennessee Bureau of Ethic and Campaign Finance. We are governed by a Board of Directors made up of Patients and Caregivers. We serve Patients and only advocate for Medical Cannabis. We hold no opinion on the legalization of alcohol or marijuana and do not advocate for these positions. 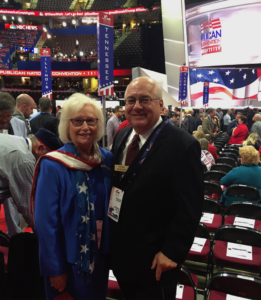 David C. Hairston, CPA serves as our Board Chairman and resides in Nashville. David is disabled with Psoriatic Arthritis, a painful autoimmune disease that cut short his professional career. He is a former consulting Partner at Ernst & Young, Managing Partner of a niche CPA Firm, and an international mergers and acquisitions expert. A lifelong Republican, David was elected by statewide ballot to attend the Republican National Convention in Cleveland in 2016. David also serves on the Board of our sister organization, Educate Tennessee. 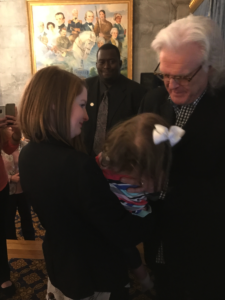 Stacie and Josie Mathes – praying with Ricky Skaggs at the 2016 Prayer Caucus at the State Capitol of Tennessee.

Stacie Seay Mathes is a member of our Board and co-leads our Family Group. She resides in Greenville and is caregiver to her daughter, Josie, who has infantile seizures from epilepsy. Stacie lead the effort that delivered Tennessee’s 2014 CBD Oil Bill that protects our citizens with an epilepsy diagnosis. She chronciles the efforts for her Daughter at Josie’s Journey. 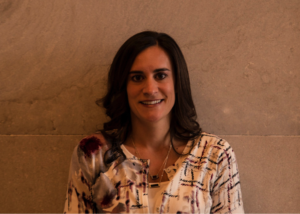 Sandy Bush at our State Capitol in Nashville.

Sandy McClurg Bush, RN is a member of our Board and co-leads our Family Group. She lives in Knoxville and is active with the Epilepsy Foundation. She is caregiver to her son Cam, who has a rare form of epilepsy, SCN8. She is a registered nurse and was instrumental in passing the 2014 Tennessee’s CBD Bill protecting our citizens with an epilepsy diagnosis.